Matt is a passionate musician, director and educator. He graduated from the Queensland Conservatorium in 2009 with a degree in clarinet performance before completing his Diploma of Education from QUT in 2012. He began doubling on the saxophone and developed a love for jazz at a young age. A teacher by day, Matt has established band programs at numerous school’s on Brisbane’s north-side. In addition to directing the Swingalicious Big Band Matt regularly performs in orchestra pits and with community groups throughout Brisbane.

Swingalicious’ first Alto Sax player, and creative multi-tasker, Shannon has always been passionate about enriching her life through making music. Picking up her first instrument at age eight, she hasn’t been able get enough, her collection of skills now ranging from Flute to Tuba! Thriving in musical environments, she has enjoyed taking part in various ensembles, including numerous jazz bands, concert bands, wind ensembles, chamber groups and orchestras. She is currently studying a double bachelor of music and education at the University of Queensland and hopes to become an instrumental music teacher with well-rounded instrumental capabilities. Shannon enjoys sharing her passion with others and enriching as many lives as possible with the joy of music. She also enjoys DIY crafts, cooking, watching movies, dancing and long walks on the beach.

Amanda has a music degree from Queensland University, and after graduating worked as a puppeteer touring and performing throughout Australia. After having a family she went back to her first love of music and now works for Ellaways Music, looking after families and young players who are about to embark on the very start of their musical journey. Her main instruments are Oboe and Cor Anglais, and in the past few years she has performed in the pit orchestra for numerous musical productions such as Miss Saigon (Savoyards), West Side Story (QMT), Phantom of the Opera (RMT), Wizard of Oz (both RMT and QMT 2014 Productions) and Beauty and the Beast (Savoyards). In Swingalicious she moonlights on Alto Sax, learning heaps and having lots of fun playing great music with a fantastic bunch of peeps.​ 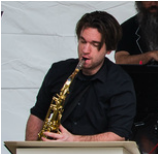 Although often busy nurturing a mild coffee obsession, Nikki also likes to spend her time playing Baritone Saxophone in the Swingalicious Big Band. Currently, she is completing her final year of a Bachelor of Music (Honours) in Saxophone Performance at UQ, and has had the recent privilege of performing in the Australian Saxophone Orchestra at the World Saxophone Congress in Strasbourg, France in July 2015. Her special interests are mostly found in saxophone and music therapy with particular focus on the way in which the body and mind can be transformed through music! Nikki has enjoyed many opportunities to share her love of saxophone with the wider community, including playing as a soloist with QYO2, and a member of QCSO on Baritone Sax, Kelvin Grove Wind Orchestra on Alto, Alto/Baritone in her saxophone duo, as well as entertaining at weddings and events with her saxophone quartet, Volaré. She also performed in the Australasian Saxophone and Clarinet Conference in 2013.  She loves to teach saxophone and enjoys volunteering and camping at music festivals- the muddier the better! Aside from playing saxophone and performing with others, Nikki loves to experiment with vegetarian cooking, enjoys peanut butter probably a little too much, and day dreaming about travelling!

Adam is our lead trumpet player who originally began on the organ and moved to the trumpet at just 10yrs old. Having performed with various groups across Brisbane ( Kelvin Grove Wind Orchestra & New Groove Jazz Ensemble amongst others), he now finds himself with the Swingalicious Big Band. Career highlights include:
* Competing in A Grade championship bands in both classical and jazz styles
* Being accepted into State Honours Programs in 2003 & 2004
* Participating in workshops with the Australian Army Band at Duntroon.
* Pit Musician performing in The Boy From Oz, The Sound Of Music, Little Shop Of Horrors, Jesus Christ Superstar, The Wizard Of Oz, My Fair Lady, Legally Blonde, Come Fly With Me, The Music Man, Hairspray.

​Being a pit musician for a number of local theatre productions hasn't stopped Adam from earning his Pilot’s Licence and travelling to 30+ countries. One day, he hopes to combine his loves and tour internationally as a trumpet player. 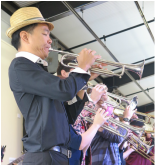 Justine is an Aquarian who enjoys long walks on the beach, moonlit conversations, and playing trombone in the Swingalicious Big Band. She is a lover of music, writing, and photography enjoying the opportunity to find and share the beauty of the art in the world around her. Justine's secret love of brass banding has fuelled her passion for music for many years though she has thoroughly enjoyed her many opportunities to play in different types of ensembles and productions, the list of which is too extensive to fit within the character limit. Justine looks forward to sharing her love of music more with her young son as he grows. 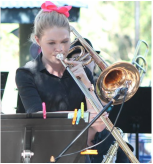 ​After picking up the Trombone at just 6 years old, Danielle hasn’t been able to get enough. During her musical career, she has enjoyed taking part in many different ensembles which include various big bands, honours programs, musical orchestras and recording bands with the extensive list of instruments she is able to play. Whilst starting off as a classical musician, Danielle found the light at the end of the tunnel with Jazz music and is currently studying a Bachelor of Music at the Jazz Music Institute in Bowen Hills. During her degree, she has had the opportunity and privilege to play with some of the biggest names in the world of jazz such as Winton Marsalis, The JALC Orchestra and The Count Basie Big Band. 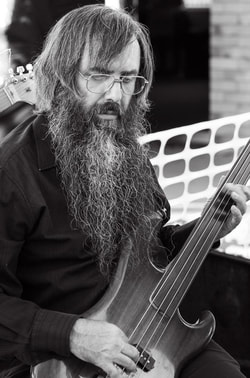 He play da Bass ok. He find the low frequencies soothing. This is cause the Bass is always playin' which is much soothing. Soothing is good. Low notes make soothing. Bass make low notes. Bass is good. He likes most musik cause most musik has Bass. It all has the same notes. Only two kind of musik, good musik and bad music. He like the good musik. Good musik has lot of Bass, that why it good. He play lots of Bass for very long time. Before anyone else in band was born he play Bass, He play Bass longer than his beard, and he drove Kombi (not the split screen). Played Bass with lots of peeple. Lots of Bass. He had some pretty good Bass and Rigs and RIGS and Kombi (it was a 1600cc twin port motor). Kombi go with RIGS ( I took out seats so I could fit W bins in it. What? I know W bins is over top NOW). Got some good Bass now and rig, rig fit in car. He Play Double Bass cause that twice as much fun.​

​Born and raised in Cairns, Mitch grew up with music as a constant companion around the house. Encouraged to play an instrument he chose the guitar at age 10.
He has studied and enjoyed many styles throughout his musical journey; classical, blues, rock, pop, funk, metal and jazz.
Having studied at QUT doing a BA in music he has played in many bands, not the least, the QUT Big Band under the guidance of Brad Millard.
The guitar has taken Mitch all over Australia and overseas playing with and supporting acts such as v.Spy v.Spy, Directions In Groove, Karen Schaupp, Karnivool, Ian Moss, Jelly, The Boat People, Joe Camilleri, Tyrone Noonan and Geoff Hooton from george to name a few.
Mitch is currently playing with covers band Velvet Kiss and having just recorded an original album with Will Lebihan from Pharaohs Playground he is looking forward to releasing it soon.
Being one of the newest Swingalicious members, he is excited and enthused by the music and the talent of the group. Mitch is happy sitting back and strumming while the horn section blow everyone away.

Playing music from age 7, it’s no wonder Ryan classifies himself as a musician first and a person second. A music teacher by trade, he devotes his spare time to music - playing in bands like rock quartet The Nightlight Sleepers and covers band Tackleberry in any pub and club this side of the Gold Coast. Over the past 20 years he has learnt to play eight different instruments and is enjoying his roles as drummer and vocalist with the Swingalicious Big Band. Ryan has recently joined a group of likeminded musicians who are building a recording studio for Black Dog Music, the next stage in his singer / song writing career.​